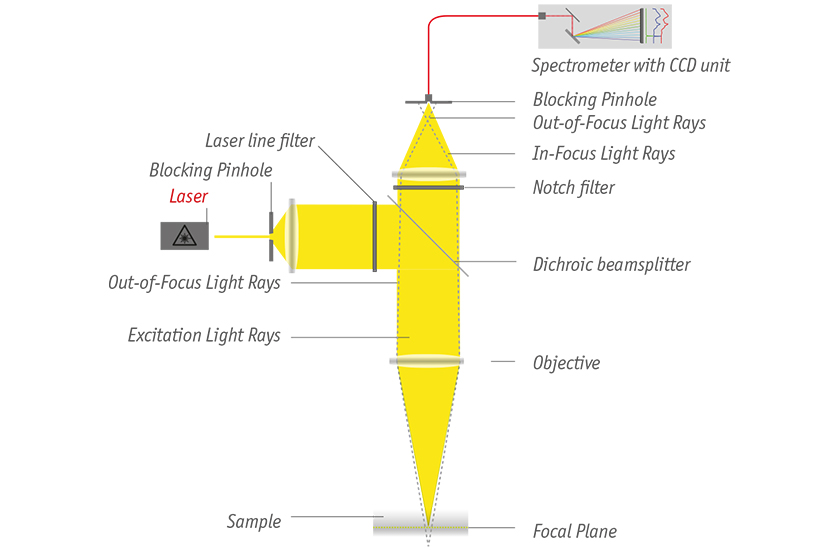 Historically, the Indian scientist C. V. Raman discovered in 1928 the - what was later called Raman - effect by demonstrating inelastic scattering of monochromatic light by highly viscous fluids. Only two years later, Raman was awarded the Nobel prize for his achievement. The Raman effect occurs if light impinges on a molecule and interacts with its electronic bonds. The spontaneous Raman effect is described as a three-level event, in which an incident photon first excites the molecule from ground state to a virtual state. When the molecule relaxes, it emits a photon and returns to a different rotational or vibrational state. The difference in energy between the original and the excited state leads to a shift in the frequency of the emitted photon.

Raman microscopy and its applications

Recording Raman spectra at single or multiple locations is a technqiue widely used in condensed matter physics and chemistry to study vibrational, rotational, or other low-frequency modes of a system. Raman spectra provide a fingerprint by which molecules and materials can be distinguished from each other. Typically, the fingerprint region of organic molecules is in the range of 500 to 2000 cm-1, where one wavenumber (cm-1) corresponds to an energy shift of approximately 0.12 meV at 532 nm excitation wavelength. Other applications of Raman spectroscopy include the determination of crystallographic orientation, gas analysis, material characterization, and observation of low energy excitations such as phonons, magnons, and superconducting gap excitations.

In a modern confocal Raman microscope, a laser source illuminates the sample as depicted in the figure below. Standard sources include frequency doubled or tripled Nd:YAG (532 nm, 355 nm) and HeNe (632.8 nm) lasers. The excitation is passed through a laser line filter to block all undesired wavelengths, and then focused on the surface using an objective. To reject elastically scattered light from the sample (Rayleigh scattering), the backscattered light is spectrally filtered through a dichroic mirror and a notch filter. The remaining signal is then spatially filtered through a blocking pinhole, and then propagates into a spectrometer, where the Raman spectrum is recorded and analyzed with a CCD camera.

Investigation of high-Tc  superconductors (pnictides, cuprates) and other new materials such as graphene have led to a large demand for Raman microscopy also at low temperatures and in high magnetic fields. The cryoRaman exactly addresses these needs and allows the user to record Raman images and Raman spectra over a broad range of temperatures (1.8 to 300 K), and at magnetic fields of up to 15 T. In materials with strong electron-phonon coupling, such as graphene, the cryoRaman is a very efficient tool to study both mechanical and electronic properties of a sample. A sophisticated software allows to analyze, sort, average, and postprocess spectra, enabling the user to investigate finest details and fingerprints in the Raman signature.