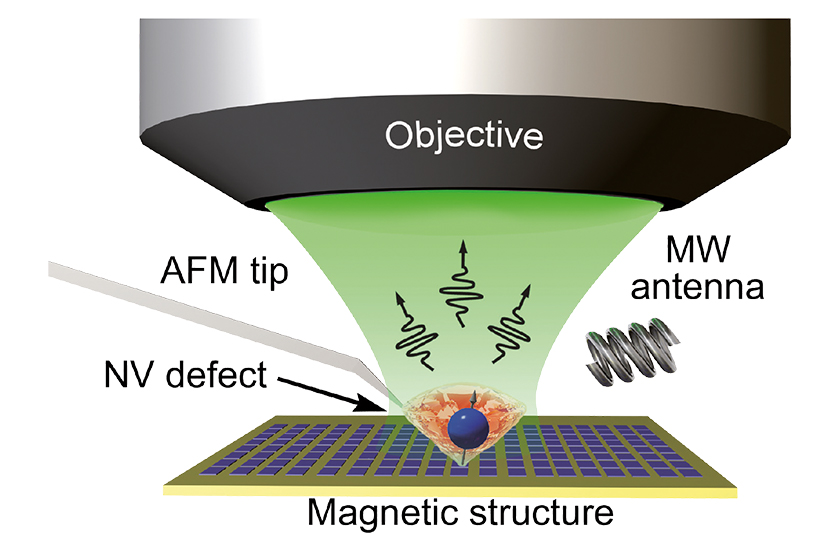 After decades of evolution in magnetic imaging, combining the sensitivity needed to detect single electron or nuclear spins with a spatial resolution of a few nanometers may soon get within reach of current state-of-the-art instrumentation: optically detected magnetic resonance (ODMR) is commonly considered to be the most promising candidate to achieve this goal by using the unique properties of single nitrogen-vacancy (NV) centers in diamond. While there is huge scientific activity to reliably prepare appropriate nano-diamonds with tailored NV center characteristics and to attach them to atomic force microscope tips, attocube as a commercial supplier of scanning probe microscopes is complementing these efforts by providing an ideal platform for ODMR: the attoAFM/CFM combines a cantilever based atomic force microscope (AFM) with a high-numerical aperture confocal microscope (CFM) (see figure).

As a result, the AFM tip is so compact that it fits in between the sample and an objective with high numerical aperture and low working distance. The tip is typically operated in non-contact mode using a phase-locked loop (PLL) to excite the probe at resonance and track any frequency shifts due to tip-sample interactions. The PLL keeps this shift at a constant value while scanning over the surface and hence keeps the force on the tip constant. Simultaneously to the information provided by the AFM probe, the CFM reveals complementary optical information of the sample surface. To maintain a constant distance between the low temperature compatible lens and the sample, upon force changes, only the AFM tip is adjusted in height by a dedicated scanner.

Local magnetic fields are subsequently measured via the Zeeman shifts of the NV defect spin sublevels which are directly proportional to the local magnetic fields encountered by the tip. This condition can be detected by a decrease in photoluminescence intensity of the NV center under resonant microwave excitation, referred to as ODMR. Moreover, using a lock-in technique allows tracking of the resonance shift while rastering the sample, thus enabling to record a local iso-magnetic field map with nanometer resolution.