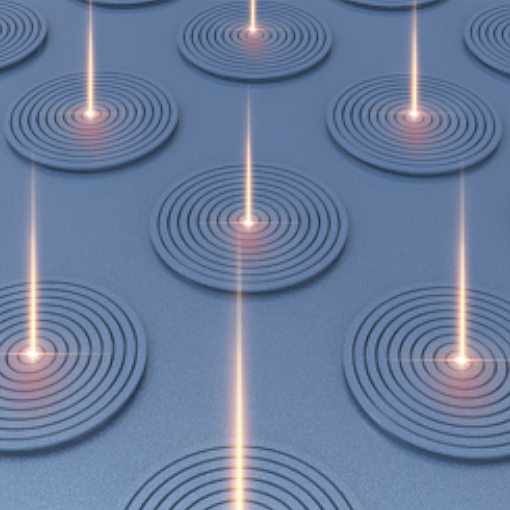 Single photon sources on the way to QIP

Single-photon sources will be a fundamental building block for future quantum information devices. For advanced implementations, the photon sources must emit simultaneously high efficiency and indistinguishability photons. On the way towards an optimal solid-state based single-photon source, the group of Chaoyang Lu and Jian-Wei Pan at the University of Science and Technology of China (Shanghai, CN) presented a background-free method (two-color excitation) for generating spectrally isolated indistinguishable photons [1] and polarized single photons from elliptical micro-pillars. The optical measurements were performed using an attoCFM I cooled by a closed cycle attoDRY2100 cryostat. With their measurement method they demonstrated a state-of-the-art polarized single-photon efficiency of up to 60% and an indistinguishability of up to 0.975 for the micro pillar device [2], which allowed them to perform the first 20 photon experiment leading toward quantum supremacy [3].

One of the most promising approaches towards devices that could act as a building block for quantum computing and quantum information technology are quantum dot based single photon sources. Some of the standing technical challenges are coupling efficiencies, lossy transmission of quantum states, and the integration of other photonic devices such as electro-optic modulators.
The group of Edo Waks at the University of Maryland (Maryland, USA) tackled these demands by developing an alignment-free fiber-coupled single photon source emitting at the telecom wavelength.
The heart of the device is a nanobeam with an embedded quantum dot attached to a tapered fiber. The photons emitted from the quantum dot are guided to the fiber, from which it can be transferred to other optical device. The characterization required a home-made all-fiber photoluminescence setup that was cooled to 4 K using the closed cycle attoDRY1000 cryostat. The observed single-photon emission was detected with a brightness of 1.5 % and a purity of 86 %. With these results the developed device is a promising candidate for quantum computing as it offers the required usability and performance.

This measurement was realized with the attoDRY1000.

Iron-based superconducting pnictides feature relatively high transition temperature and a co-existence of the superconducting state with antiferromagnetic ordering. This remarkable combination brings these materials into the focus of research. The group of Prof. Susannah Speller at the Materials Department of the University of Oxford (Oxford, UK) used an attoAFM I cooled by a closed cycle attoDRY1000 for magnetic force measurements at about 4.6 K to investigate the local electronic structure and chemistry of RbxFe2-ySe2 crystals.
The group showed a fine-scale stripey morphology of the superconducting phase which - combined with previous findings - paves the way to understand the intriguing electronic and magnetic properties of these compounds. 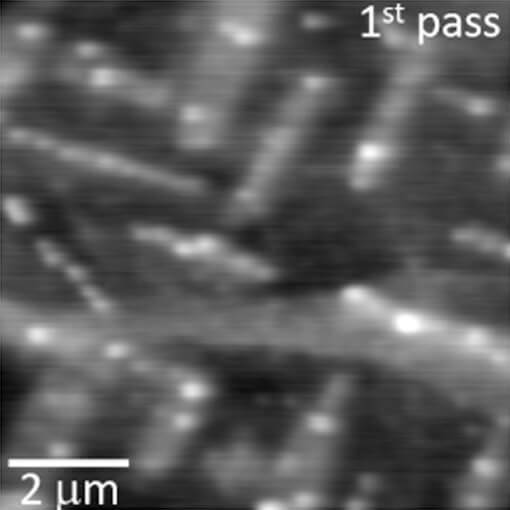 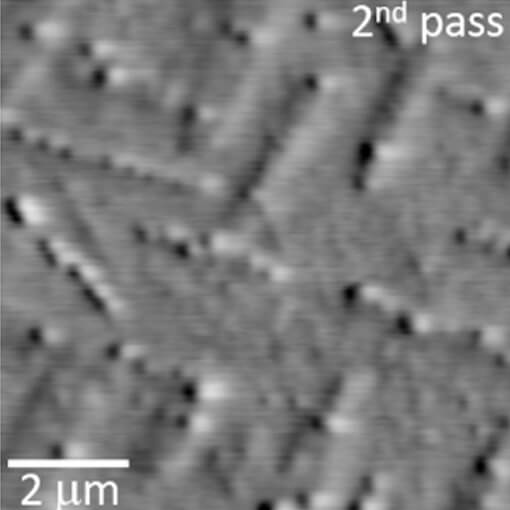 A new way to modulate exciton-complex emissions of TMDs

A new type of atomically layered transition-metal dichalcogenides (TMD) was developed by Mr. Taishen Li and co-workers from the University of Science and Technology of China (Hefei, China): a triangular inkslab-like WSe2 homojunction with a monolayer in the inner surrounded by a multilayer frame.Optical and scanning photocurrent microscopy (SPCM) measurements performed with the attoCFM I, cooled by a closed cycle attoDRY1000 to cryogenic temperatures, shows a clear redshift of the photoluminescence peaks from the center to the edge region of the inner monolayer, reflecting a high charge density gradient. In addition, a significant rectifying behavior and photovoltaic response across the homojunction is observed. All in all, the results lead to efficient modulation of the exciton-complex emissions of TMDs.

Measurements of field-driven transformation of a domain pattern

The group of Erik Folven at the Norwegian University of Science and Technology (Trondheim, Norway) used an attoAFM I for MFM measurements with a closed cycle attoDRY1000 to demonstrate how topological defects may be invoked to understand magnetic domain state transitions. The atomically sharp and magnetized tip of the microscope is scanned across the thin film surface to pick up the out-of plane stray fields from the sample and thus is sensitive primarily to spin textures such as domain walls and defects. The MFM measurements taken at 5K help to understand and describe micromagnetic domain state transitions and to assess their stability in remanence. This insight may open for new approaches to control the switching properties of micro- and nanomagnets.

Coupling single defects to a nanowire

Using an attoCFM I cooled by an attoDRY1000, the group of Edo Waks at the University of Maryland (Maryland, USA) succeeded to couple quantum emitters in a tungsten diselenide (WSe²) monolayer self-aligned to the surface plasmon mode of a silver nanowire. The achieved lower bound coupling efficiency was measured to be 26% ± 11% in average from the emitter into the plasmonic mode of the silver nanowire. The presented technique is versatile to construct coupled systems consisting of diverse plasmonic structures and single-defect emitters in a range of two-dimensional semiconductors. Such a coupled system could be used for applications such as ultra-fast single-photon sources, which paves a way toward super-compact plasmonic circuits. 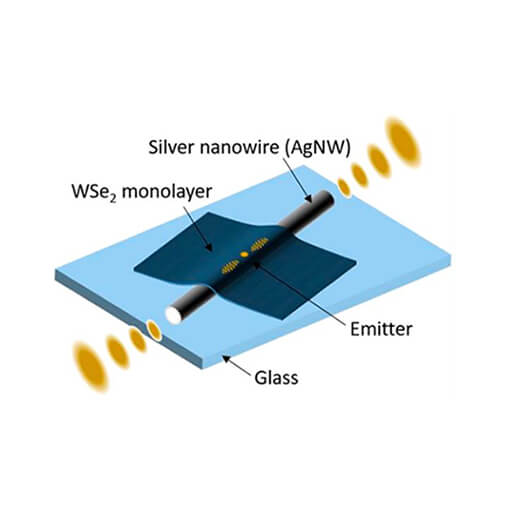 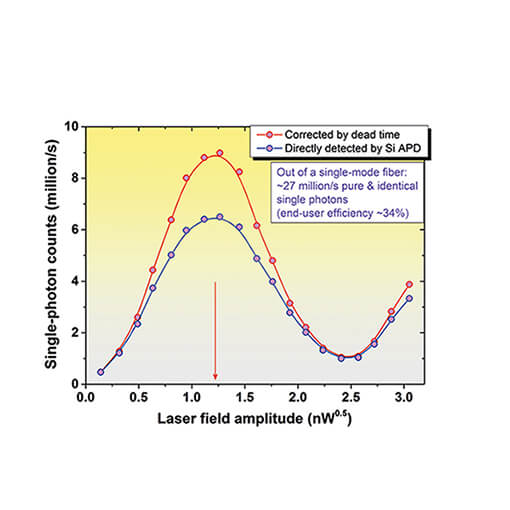 Research groups led by Jian-Wei Pan & Chao-Yang Lu in China and Sven Höfling in Germany & UK have successfully demonstrated the first quantum simulator based on single photons that beats early classical computers. In Nature Photonics, they report on “High-efficiency multiphoton boson sampling“, implementing 3-, 4-, and 5-boson-sampling with rates which are more than 24,000 times faster than all previous experiments, and 10-100 times faster than the first electronic computer (ENIAC) and transistorized computer (TRADIC) in human history. Their work, which was carefully prepared and accompanied by their 3 previous papers published in PRL (see below), kick starts a new era of photonic quantum technologies-going beyond proof-of-principle demonstrations and building a quantum machine to actually race against different generations of classical computers. In recognition of their achievements in quantum teleportation research, the very active and highly respected Chinese group recently also won the 2015 Physics World Breakthrough of the Year award and the 2015 State Nature Science First Class Award in China. In addition, Chao-Yang Lu was portrayed by Nature last summer as one of the “Science stars of China”. For their quantum dot experiments, his group uses three attoDRY cryostats equipped with attocube positioners, scanners and cryogenic objectives. Visit the group’s homepage for more information on their experiment.

The data to the left show photon anti-bunching experiments performed on a single quantum dot. The optical insert was cooled down by a closed cycle attoDRY1000 cryostat. Without any special effort the customer observed that the dot luminescence intensity remains constant within 14% over 10 hours.

This measurement was realized with the attoDRY1000. 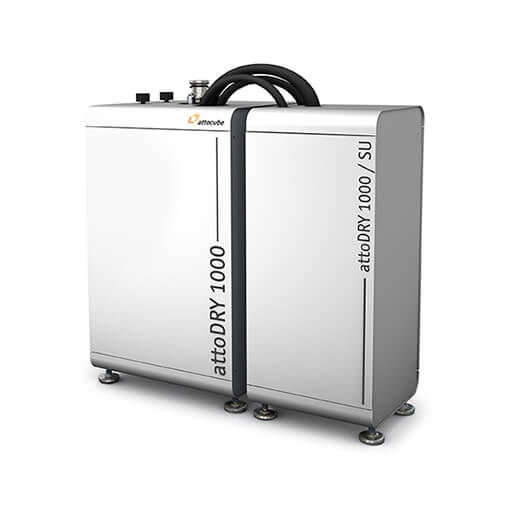 The attoDRY1000 is a cryogen-free cooling system setting new performance benchmarks. The attoDRY1000 was specifically designed to provide an ultra-low vibration measurement platform for cryogenic scanning probe experiments without the need for liquid helium.
The standard closed-cycle system enables vibration-sensitive experiments in a temperature range from 4 K to 300 K. The optionally available microscope inserts are cooled by a controlled exchange gas atmosphere. Superconducting magnets up to 9 T are available as an option. Due to a proprietary design, mechanical vibrations created by the pulse-tube coldhead are decoupled from the measurement platform.
When measured with the attoAFM I, vibration amplitudes of less than 0.15 nm RMS are routinely achieved (bandwidth of 200 Hz, vertical direction). Despite the mechanical decoupling between coldhead and sample platform, the cooling performance ot the attoDRY1000 is simply outstanding. Temperatures as low as 3 K and probe cooldown times as fast as 1 hour make cryogenic scanning probe experiments a delight.
For the attoDRY1000, a wide variety of scanning probe microscopy inserts is available, ranging from confocal (CFM) to magnetic force microscopy (MFM). 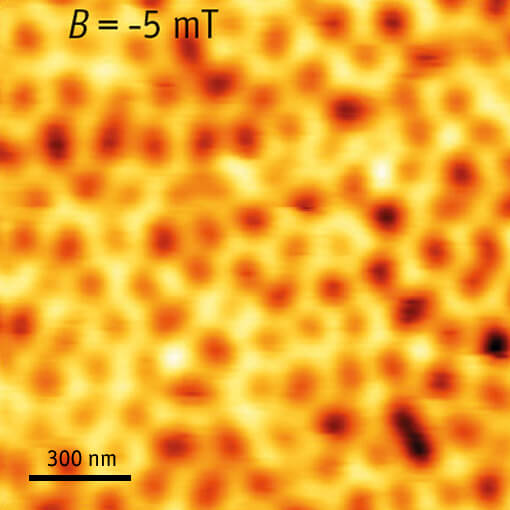 MFM imaging of a Skyrmion lattice

In collaboration with Jan Seidel from UNSW Sydney, A. Bauer & C. Pfleiderer, TU Munich we have successfully imaged the elusive Skyrmions and their magnetic field evolution in the attoDRY1000 cryostats using the attoAFM/MFM I. See what’s possible nowadays with our sophisticated commercial instruments!