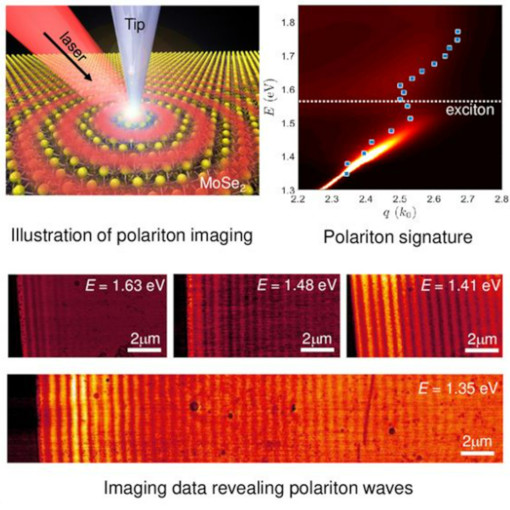 The exciton–polariton (EP), a half-light and half-matter quasiparticle, is potentially an important element for future photonic and quantum technologies. It provides both strong light–matter interactions and long-distance propagation that is necessary for applications associated with energy or information transfer. Recently, strongly coupled cavity EPs at room temperature have been demonstrated in van der Waals materials due to their strongly bound excitons. Here, we report a nano-optical imaging study of waveguide EPs in MoSe2, a prototypical van der Waals semiconductor. The measured propagation length of the EPs is sensitive to the excitation photon energy and reaches over 12 µm. The polariton wavelength can be conveniently altered from 600 nm down to 300 nm by controlling the waveguide thickness. Furthermore, we found an intriguing back-bending polariton dispersion close to the exciton resonance. The observed EPs in van der Waals semiconductors could be useful in future nanophotonic circuits operating in the near-infrared to visible spectral regions. 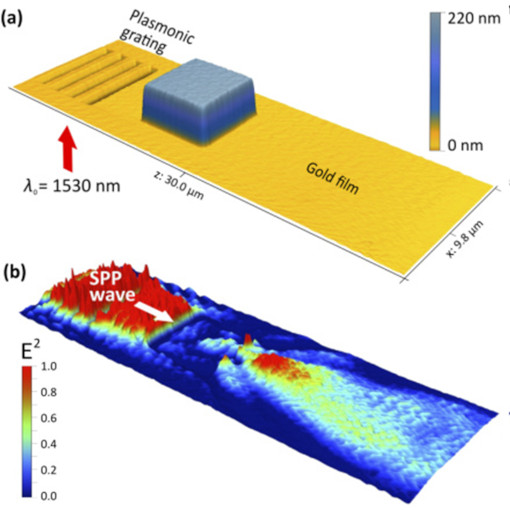 When a laser pulse of wavelength λ shines on the diffraction grating in the gold film, this gives rise to another type of electromagnetic excitations, known as surface plasmon polaritons. They propagate along the gold film and undergo 60% compression to a wavelength of 0.6λ when passing the square nanoparticle. This so-called plasmon nanojet effect, observed in the study for the first time, offers intriguing prospects for localizing light to the point where it becomes feasible to use it in fast and compact optical computers.

The authors proposed in this study a microstructure based on a dielectric cuboid placed on a thin metal film that can act as an efficient plasmonic lens allowing the focusing of surface plasmons at the subwavelength scale. Using numerical simulations of surface plasmon polariton (SPP) field intensity distributions, we observe high-intensity subwavelength spots and formation of the plasmonic nanojet (PJ) at the telecommunication wavelength of 1530 nm. The fabricated microstructure was characterized using amplitude and phase-resolved scattering-type scanning near-field optical microscopy. We show the first experimental observation of the PJ effect for the SPP waves. Such a novel, to the best of our knowledge, and simple platform can provide new pathways for plasmonics, high-resolution imaging, and biophotonics, as well as optical data storage. 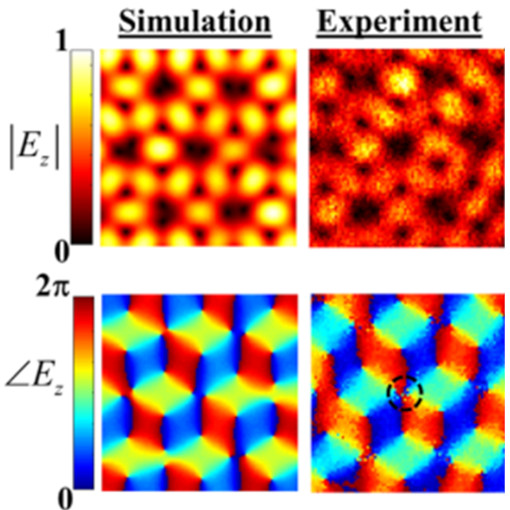 Best thought of as topological excitations that share the same topology as a set of magnetic moments wrapped around a sphere, skyrmions are widely thought to be promising for magnetic storage and spintronics applications. Shai Tsesses and colleagues have now brought skyrmions into the arena of optics. By controlling the interference of plasmon polaritons on a patterned metallic surface, they have succeeded in creating a lattice of optical skyrmions. The authors were able to image this pattern of evanescent electromagnetic fields using a phase-resolved near-field optical microscope. In contrast to their magnetic analogues studied in solid-state systems, these optical skyrmions can be continuously tuned from a so-called bubble- to Néel-type structure. However, in common with many such topological excitations, the lattice of optical skyrmions displays a remarkable robustness to imperfections.

The extent to which light can be manipulated and processed in photonic systems has already given us countess technologies. Few would bet against a few more popping out following this discovery of photonic skyrmions.